You are here: Home / Archives for thanksgiving

How to Brine Your Thanksgiving Turkey

It’s that time of year again, and I feel my mission in life is to spread the word about brining your turkey.  Do you brine? Are you asking yourself what in the world “brining a turkey” is anyway? Brining is simply soaking the turkey – marinating if you will – in a salty solution before you cook it.  It’s suggested that you soak the turkey in brine 12-24 hours, so you’ll need to plan ahead. Don’t worry, this won’t make it taste salty, and for goodness sakes, don’t TASTE the brine! It’s to soak the turkey in, not eat. 😉

Why brine?  Someone on my local Freecycle cafe told me about brining a few years ago. I decided to try it, and let me say this as eloquently as possible: “Once you Brine, you’ll NEVER go back!” The salt solution breaks down the turkey’s molecular structure, acting as an extreme meat tenderizer.  I’ve never had a more moist, tasty and tender turkey. It is really amazing!

While you’re in planning mode, check out Butterball’s conversion charts which include:

*** And don’t miss all our fantastic Thanksgiving (and other) recipes at GimmieRecipes.com

* Brine for one hour per pound.  e.g. a 15 pound bird will soak in brine for 15 hours before cooking.

TIPS: You can store a brined turkey for up to a day before cooking it. Don’t leave it in the brine longer than 1 hour per pound.

An alternative to making your own brine is using a prepackaged brine (which includes a brining bag!), such as Fire & Flavor, which I’m trying out for the first time this year. Check out their how-to video! 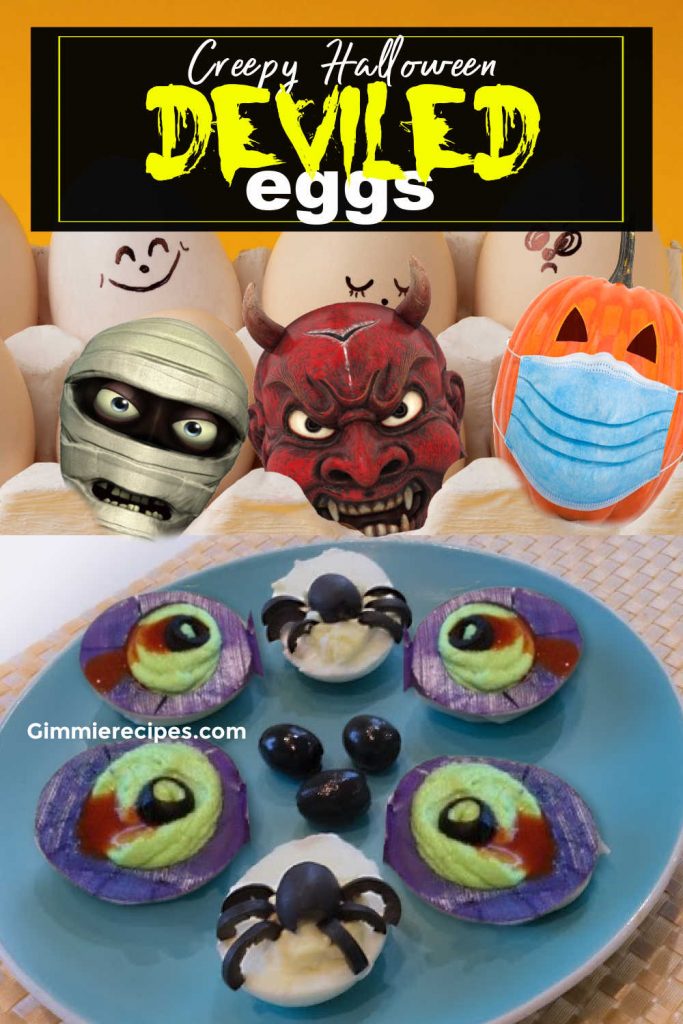 Looking for a unique appetizer for your Halloween party?  “LOOK” no further!  These Scary Eye Deviled Egg Halloween Appetizers are a great alternative to candy! They’re inexpensive, easy to make and taste great too!

When determining how many you’ll want to prepare, remember that you’ll get two of these creepy “eyes” from each egg.  I used 12 eggs; you can adjust the eye filling recipe if you use more or less.

Cost breakdown: This recipe calls for a dozen eggs (you can use less), which I got on sale for $1.50.  I had the food coloring, and only used a few drops. I also bought an avocado for $1, but had the mayo, lemon juice and horseradish & hot sauce (which are optional anyway). I had a can of black olives, and you only use a few, so that cost is also negligible. So in total I got 24 Scary Eye Deviled Eggs for approx. $2.60! That means they cost about 10 cents each! This is literally like Martha Stewart on a dime! lol! 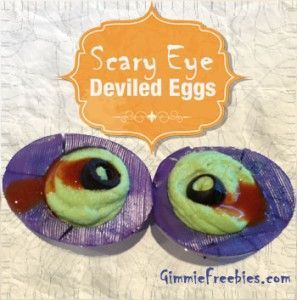 How to assemble your Scary Eye Deviled Egg Halloween Appetizers:

Another fun (and super easy) idea:  let your kids draw cute and scary faces on the extra hard boiled eggs! 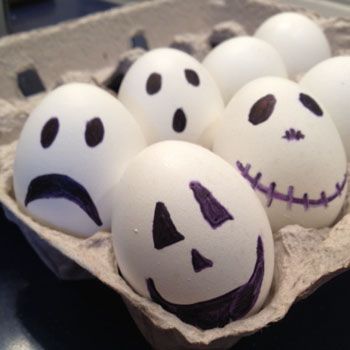 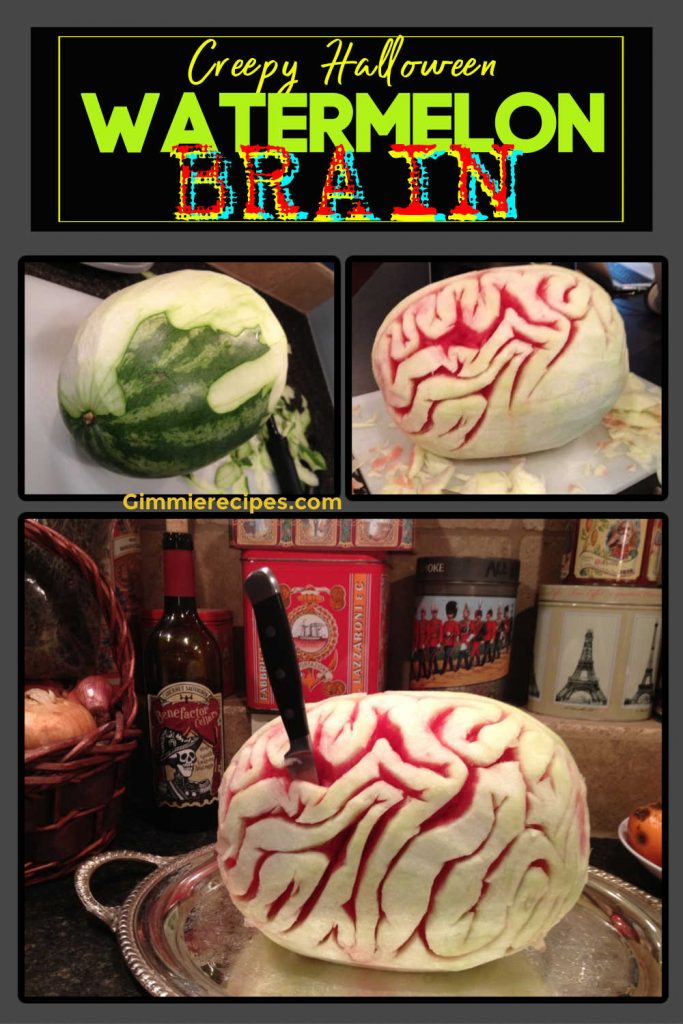 Check out how to make this awesome watermelon brain! Impress your Halloween Party guests with this creepy food favorite. This is one of our most popular posts on Facebook and Pinterest. Be sure to follow us if you don’t already, and repin to save this awesome and easy Halloween party food! It’s really as easy as carving or sculpting the watermelon to look like a brain! Peel it, then cut out small ridges to expose the red inside. And, you have a gory, totally unique treat for your Halloween party!

Like it? Get the free instructions from Instructables!  Trick out the treats for your next gathering of ghouls with these 20 Halloween food projects.

These desserts, snacks, and drinks will appeal to people who want something cute and seasonal. And it will also appeal to the folks who respect the culinary adventurousness of Hannibal Lecter and the Donner party, but aren’t willing to fully commit to the requisite lifestyle change to jump in whole hog (or long pig in this case.)

Read on to find the perfect treat for your Halloween gathering.

There are hundreds of free books on Amazon!! Check out the Kindle Store Bestsellers.

You can read Free Kindle eBooks on any device! Click link above to get your free book. And, you can read it anywhere.You don’t even need a Kindle!

This is the fastest, easiest, most DEEEEEELICIOUS breakfast one could ever hope for! Seriously, amazing! Perfect amount of cinnamon and waffle, and soooo easy!  My husband was so impressed, he almost didn’t believe how easy it was!

Just pop open a tube of cinnamon rolls, and plop them on a hot waffle iron. Before you know it, voila! They’re so good! 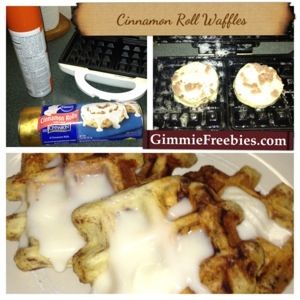 Sure, they’re kind of funny looking, but they taste SO sweet and yummy!  Sweet potatoes are highly nutritious and are loaded with antioxidants and even have anti-inflammatory properties. They are a good source of complex carbohydrate, beta-carotene, manganese, vitamin B6 and C as well as dietary fiber. The spinach and cranberries add to the flavor and also to the health benefits!

So, put your microwave to use and bake up some super good and good-for-you Cranberry Stuffed Sweet Potatoes!  This recipe will take you less than 15 minutes from start to finish and your dinner guests will think you’ve slaved over a hot oven for hours. It’s a very inexpensive meal item, I paid just 69 cents apiece for these, and you can find them at your grocery store all year round.

Adapted from a recipe on Walnuts.org

With apples in season, now’s the perfect time to try this amazingly Easy Apple Tart recipe. They are SO good, and easy! You can make the crust head and keep it in the fridge to make more as “needed.” Nothing’s quite as yummy on a crisp fall day than a fresh-from-the-oven warm apple tart!